This article is also available in Spanish below.

Earlier this year, the Code for All Exchange Programme paired together Codeando México and Code for Pakistan to jointly implement two pilot projects and co-develop a framework for digital citizen-led efforts to provide input and feedback on government policies and processes. The goal was to set an example of greater accessibility to enable transparency and foster cross-learning between two Code for All affiliates.

Citizen participation is often thought of in terms of government-led efforts to include citizen voices or open opportunities for collaboration. These types of spaces (e.g. participatory budgeting, participatory policymaking, citizen feedback to improve services) are essential, but they are based on the traditional power dynamic that gives public institutions power to summon and decide how — and if — to listen to citizens.

Our collaboration aims to showcase the impact that proactive citizen participation can have on transparency, citizen rights, and service delivery by proposing solutions to our cities’ current problems through digital means.

By running a pilot in both Mexico and Pakistan, we were able to analyse and cross-reference results and document insights into how the process worked in each country, as well as compare similarities and differences in citizen needs and the effects of various socio/political/geo/economic/cultural variables. This enabled us to draw inferences based on the similarity of contexts, but also to point out characteristics not only as a country but also societal (segment-wise) in places and with organizations where the pilots were carried out.

What Is a Participatory Process?

Put simply, a participatory process is a specific method employed to achieve active participation by all members of a group in a decision-making process. The approach can be used for most issues and should give equal opportunities for everybody involved.  As we were quick to find out, it’s not as straightforward a process as we thought. For example, one challenge was that this type of participatory process is a novel idea in Pakistan. Explaining participatory democracy and participatory governance, as well as introducing government to open-source citizen participation tools and how they have been used in other parts of the world, proved to be time-consuming.

Initially, the two groups were keen to bring on board a government partner for this project. We believed that government buy-in was necessary for this to be a meaningful exercise, and this afforded us the opportunity to help the government innovate and improve in soliciting citizen input. However, we soon found out that we were wrong.  Our government partners had varying requirements and there were delays, and so we both pivoted to work with local Civil Society Organizations (CSOs).

Code for Pakistan partnered with Accountability Lab to conduct a citizen input exercise to address Covid-19 vaccine awareness and misinformation amongst women, building upon Accountability’s Lab’s work of a similar nature conducted in District Haripur of KPK province.

Accountability Lab worked with female leaders from government and civil society to debunk rumors or misinformation; disseminate verified information, and gather feedback on the coronavirus response from local communities in target Union Councils (UCs). The goal of the project was to support and enhance the role of local women leaders in raising awareness among local communities, particularly amongst women from remote districts. The campaign also aimed to strengthen communication between local government entities and communities over time, supporting renewed trust in the case of future emergencies. Accountability Lab has shared baseline and endline survey data with us, which we will use to conduct analysis and draw trends around how aware our surveyed segment of the community is in regard to Covid-19.

Codeando México partnered with the local collective URBE León as their Civil Society Organisation partner. URBE León is a collective that speaks and acts in the city regarding urban issues. It seeks to propose, catalyze and create community when it is urgently needed and helps to generate transformative dialogue about the city.

With URBE León, Codeando México initiated the partnership by holding virtual sessions to develop a deeper understanding of their work, which had previously focused on making visible the problems of access to safe public spaces for the most vulnerable groups and advocating for the challenges the city faces to reduce inequality. They did this by running a comprehensive pilot on urban issues that would be the start of a larger project for city participatory processes, following the open-source philosophy, allowing the tools, technologies, and data to be available in an open way. To better understand the challenge at hand, we developed a tool that allowed us to have both the support of reliable and quality data, as well as the understanding of the public perception and the feelings of different social groups.

What Did We Learn From This Exercise?

While our two projects ended up being significantly different in terms of scale (Code for Pakistan ran a much smaller participatory exercise than Codeando México), we both found that projects of this nature require extended time and must be envisioned as a longer-term initiative, especially if you need to include and build relationships with government and CSOs. It is also not easy to estimate the size and capacity of the team needed to execute the project in the initial stages. Since the project scope was somewhat flexible, to begin with, we were challenged in terms of resource loading and knowing how much effort was required. 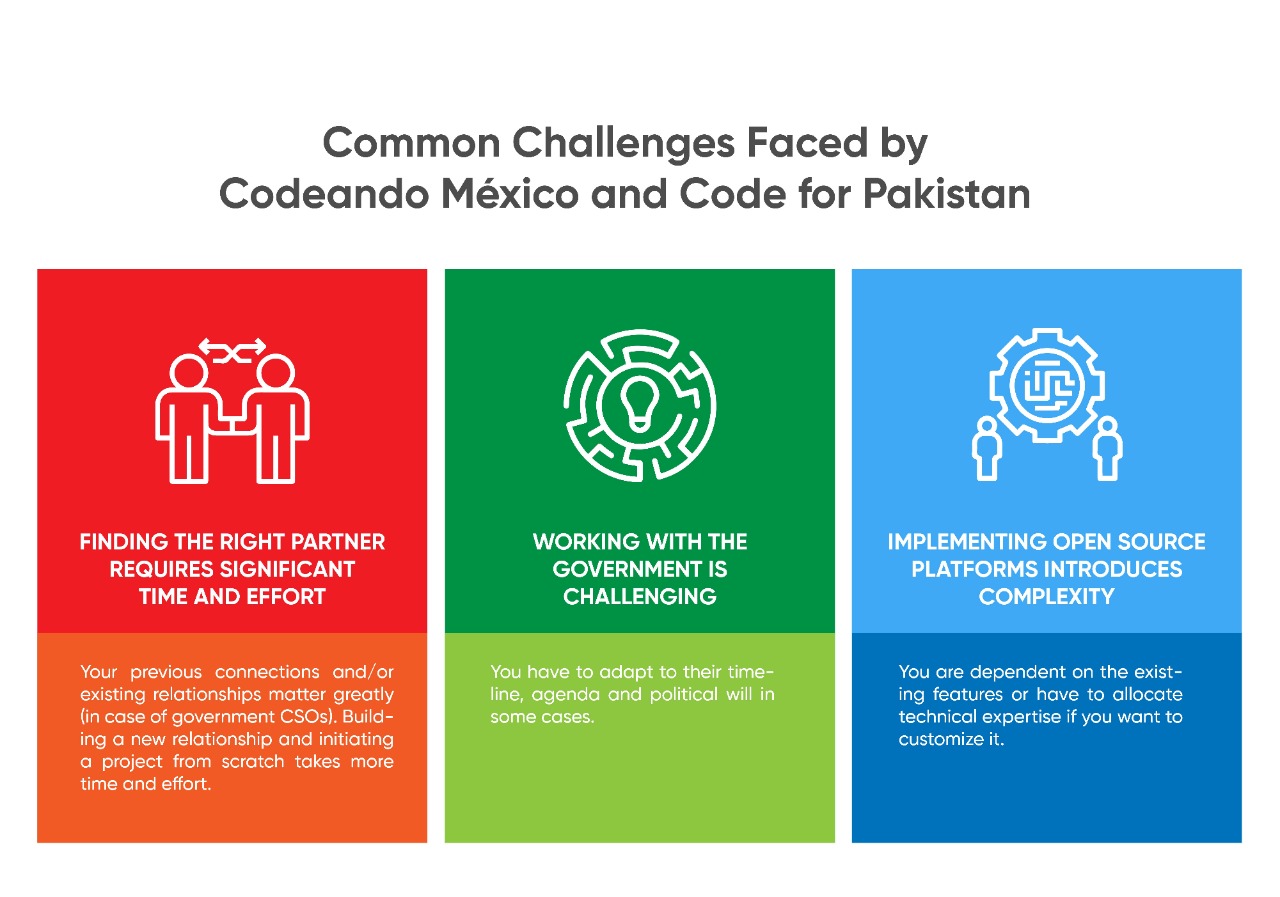 Some additional learnings from our project include:

For the past year, we have attempted to create a framework that will work in countries with geopolitical and socio-economic contexts that are similar to ours. The approach and methodology we have devised emphasize the practicality of application.

Our plan for the future is to expand the scope and reach of our exercise into additional geographies and segments of society. While we expect to use the same tools and framework, we intend to enrich the survey questions so that we receive sufficient data to enable greater insights into emerging trends.

We expect to share similar activities with CSOs and other like-minded organizations to use these methodologies to implement their citizen engagement activities.

To make sure others benefit from our experience, and remain true to the open-source model, our framework is also dynamic and iterative; it will be published on GitHub in an open format and will be kept as a working document for us and the community to keep improving based on their learnings.

To read more about the framework developed by Code for Pakistan and Codeando México, download the framework for digitally-enabled citizen-led participatory processes.

Ebtihaj is Code for Pakistan’s Product Manager. He has over 8 years of professional experience, where he has worked with various public and private sector organizations, nonprofits, and civic tech communities to build relationships, create opportunities for collaboration, and develop high-impact products to solve complex civic challenges.

Ricardo is Lead Project Manager at Codeando México. He works with the community of tech developers that focuses on civic rights, open data, and civic tech in the country. He has collaborated with NGOs, governments, and private companies in order to implement policy and build strategic capacities in data and tech. 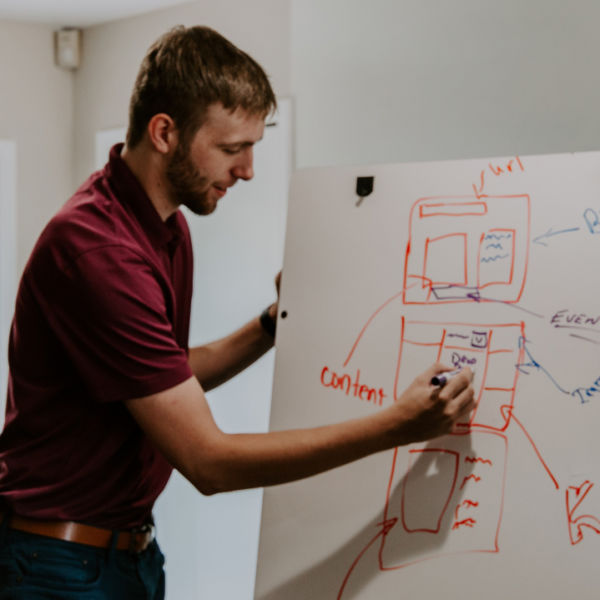